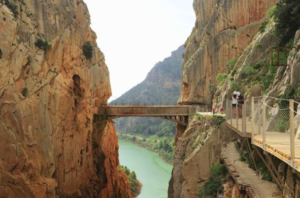 Málaga’s provincial government has commemorated the fifth anniversary of one of the area’s most popular international attractions with the presentation of a 360-degree tour. The video includes 40 points of interest throughout the Caminito del Rey, located in Ardales municipality about 50 kilometres from Málaga capital city.

Once known as “the world’s most dangerous walkway”, the Caminito del Rey (“King’s Little Path”) underwent a major renovation and re-opened on 29 March 2015. It quickly became a huge tourist attraction, with thousands of intrepid travellers from around the world drawn to its sheer cliffs and sweeping gorges.

Even vertigo sufferers have been able to make the journey, thanks to strict safety measures and reinforced barriers along the route. It has become so popular, in fact, that reservations are necessary, sometime months in advance, although the walkway is currently closed due to the coronavirus lockdown in place throughout Spain (extended to midnight Saturday, 25 April).

It can be viewed on mobile telephone, tablet or computer and – in addition to the overall pictorial and video panoramas – it also includes aerial and satellite maps of each point, and related information and descriptions.

At the moment the 36-degree tour is only available in Spanish (although it can still be be viewed quite easily) but tourism authorities hope to create English, French and German versions “soon”.

One and a half million people have walked the path over the past five years, and it has been honoured with several national and international awards, including Europa Nostra, the premier award presented by the European Union for heritage sites.

The walkway was initially built to enable workers to cross between hydroelectric power plants at Chorro Falls and Gaitanejo Falls, to provide transport access for materials, and for inspections and maintenance of the channel. Construction began in 1901 and took four years to complete.

King Alfonso XII (great-grandfather of the current monarch, Felipe VI) crossed the walkway in 1921 to commemorate the official inauguration of the Conde de Guadalhorce dam – hence the pathway’s name.

It is one metre wide, rises to over 100 metres above the river below, and extends for 7.7 kilometres, although the stretch between the Hoyo River boardwalk entrance and exit gates is 2.9 kilometres.

Find out more about inland Málaga and other stunning areas of Andalucía in our comprehensive Places to Visit guide.