Located in the foothills of the stunning Sierra Nevada mountain range in Andalucía, Granada is rich in history and culture. The city is located 142 kilometres from Málaga-Costa del Sol Airport and is close to many popular holiday destinations across the region, making it a perfect spot for a sightseeing trip or a longer holiday to explore this beautiful part of Spain.

If you are flying into Málaga-Costa del Sol Airport, there are many options available for travelling to Granada. If you prefer to drive by car, Málaga-Costa del Sol airport provides a comprehensive range of car hire services. The journey takes approximately one hour and a half hours and the fastest recommended route to Granada from the airport is via the A-92.

There are also various train routes to Granada, with travel time from the airport taking between two and three hours. The cheaper option – with a similar travel time – is usually by bus. Several bus routes are available and the prices vary depending on the service.

Once you have arrived in Granada, you can finally enjoy the stunning sights this enchanting city has to offer. One of the most notable attractions is the Alhambra, a fortress and palace that was originally built in 889 AD. As a UNESCO World Heritage Site, Alhambra has been the source of poems and songs throughout history, hosting such venerable historic figures as the Catholic Monarchs Isabella I of Castilla and Fernando II of Aragón, and the Holy Roman Emperor. Make sure to book tickets in advance if you are thinking of visiting the Alhambra, as they sometimes restrict visitor numbers on certain times of the day and year. 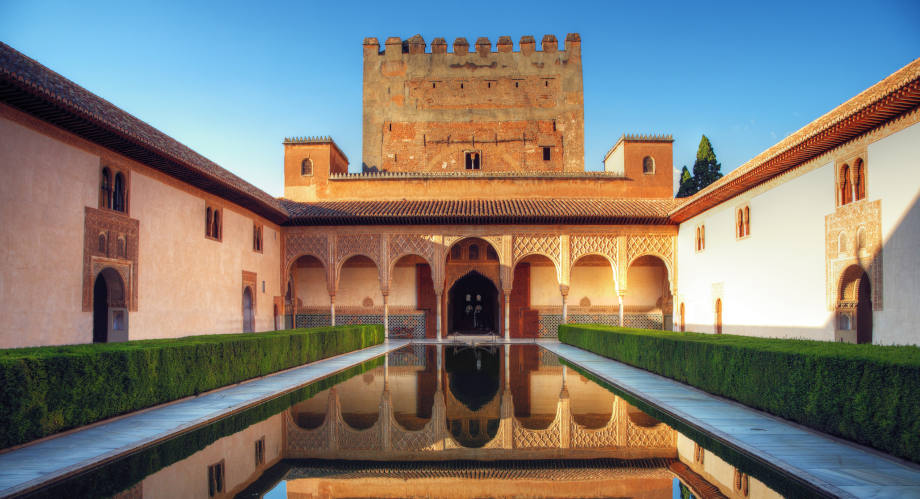 Home to a magnificent ensemble of Moorish and mediaeval architecture and culture, Granada’s other breathtaking examples of history include the 16th century Granada Cathedral and the stately gardens of the Generalife Palace (near the Alhambra).

There are also plenty of places in and around Granada to enjoy a walk and soak up the area’s stunning views. The majestic Sierra Nevada mountains are only half an hour from Granada city centre, presided over by the highest peak in Iberia, Mulhacén, which rises to 3,479 metres. Located in the heart of this mountain range is Europe’s southern-most ski resort, where many international snow sports championships have been held over the years.

If you prefer a less intensive hike and would rather have a relaxing walk through Granada to see close up what the city has to offer, we recommend you visit the historic Albaicín and Sacromonte neighbourhoods. Both areas offer incredible panoramic views of Granada and the Alhambra, and are outstanding places to explore.

Albaicín was declared a UNESCO World Heritage site in 1993 and is filled with cobble-stoned streets, historic sites and Moorish architecture. Sacromonte is east of Albaicín and is historically home to the city’s gypsy community – and flamenco. Located on the slopes of Valparaíso, this traditional neighbourhood has many fascinating cave houses that were first created in the 16th century.