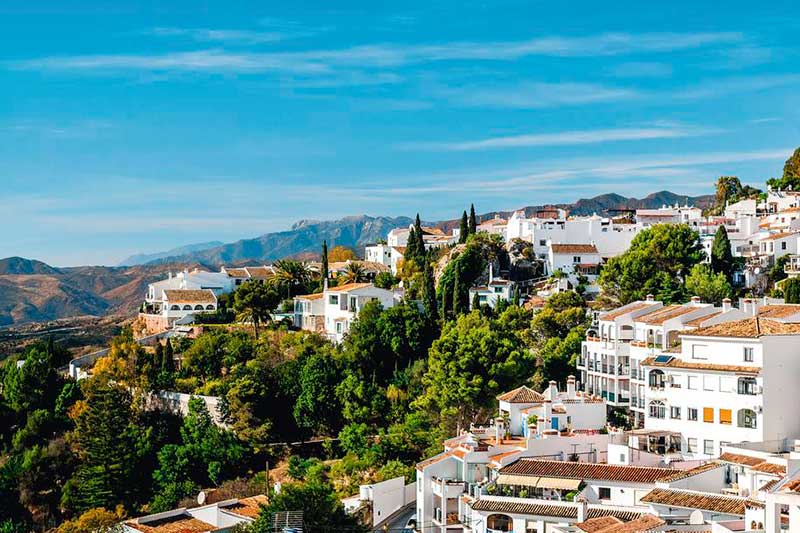 In a similar way to how Benalmádena is divided into three distinctive areas, Mijas is a municipality of essentially two parts: Mijas Costa and Mijas Pueblo.

Much of Mijas Costa isn’t as close to the sea as you might deduce from its name, instead comprising the vast majority of newly-built residential complexes slightly inland.

Mijas Pueblo, on the other hand, is a white-washed hillside village that offers exceptional views across the town and the Costa del Sol below. It is a hugely popular area to buy property, especially among foreigners.

Mijas is an archetype tourist hotspot, providing many photo opportunities throughout the town. With its stunning views to Fuengirola and the Mediterranean Sea, and a picturesque church at the town’s centre, it is pretty easy to appreciate why.

This level of tourism can get pretty crazy during the summer months, however, which might be great for adding to the atmosphere but can become a little overwhelming for some visitors. Therefore, if you would rather avoid the hustle and bustle, the best time to visit Mijas is winter (even later autumn and early spring), when the town is much quieter and you will be able to see the sights at your own pace.

You cannot visit Mijas without seeing a donkey and cart – they’re everywhere. Don’t be alarmed if you see the donkeys wearing a strange kind of nappy as they walk around. In previous times, Mijas had a major issue with donkey mess on the streets, so the nappies are used simply as a preventative measure against that unseemly situation.

Be sure to visit the Mijas bullring and main square if you are in the area. Here you will find several amenities, including shops, bars and restaurants, as well as having the chance to visit an outstanding example of a traditional bullring – now used for concerts and other shows as bullfighting is banned in many parts of Spain.

Mijas is located to the north of Fuengirola, so if you find yourself in Fuengirola you know you’ve driven too far. From Málaga-Costa del Sol Airport, after completing your car hire arrangements, follow the AP7 main highway until you come to the point where the road diverges into the tollway on the left. Stay right, take the almost immediate exit lane, turn right at the roundabout, and it is around three kilometres up the Crta. Fuengirola-Mijas road to the pueblo. Alternatively, you can take the Renfe Cercanías train from the airport to Fuengirola then a bus to Mijas Pueblo.