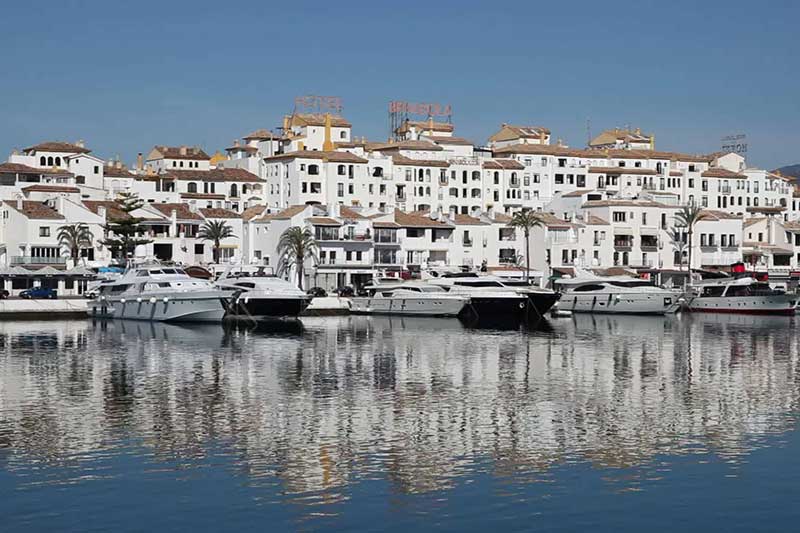 Puerto Banús is located in the Nueva Andalucía area just a few minutes’ drive south-west of the Marbella city centre.

For many years Puerto Banús has been famous for attracting celebrities from all over the world – and, subsequently, curious visitors wanting to do some celebrity spotting.

The marina is the main focal point but there is much more to Puerto Banús, with numerous designer boutiques, restaurants, cafés, banks, supermarkets and other essential amenities for both tourists and residents.

The port was inaugurated in 1970, converting José Banús (after whom it was named) into the largest property developer on the Costa del Sol. The inauguration was attended by many famous people including the Aga Kahn, Roman Polanski, Prince Rainier and Princess Grace of Monaco, Hugh Hefner and Dr Christiaan Barnard (the pioneering heart transplant surgeon). A young Julio Iglesias sang for the guests, reportedly having been paid 125,000 pesetas (€750) to do so; and the lavish affair included 22 kilograms of Beluga caviar served by 300 waiters from Sevilla.

The original plan by José Banús, who was a close friend of Spain’s then dictator, General Francisco Franco, was to build skyscrapers to house wealthy families. However, he was persuaded by Noldi Schreck (involved in the design and construction of Beverly Hills) not to do so, as the area would lend itself far better to a sophisticated Andalucian village with a marina.

His advice proved to be prescient: today Puerto Banús welcomes five million visitors a year, making it the number one leisure destination on the Costa del Sol.

Among several prominent statues in Puerto Banús, one that particularly stands out is the 3.6-tonne El Rinoceronte en Puntillas (Rhinoceros in Lace), erected in Puerto Banús in 2004 and created by Salvador Dali after a surrealist film he worked on in 1956.

Another famous landmark in Puerto Banús is a bronze and copper statue near the port which stands 26 metres high. La Victoria was created by Georgian sculptor Zurab Tsereteli and was unveiled by the Moscow mayor as a gift in 1994.